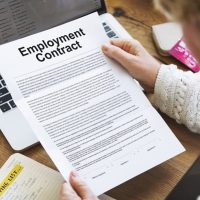 Most people who work a job in New York are classified as at-will employees, meaning that either the employer or the worker can terminate their relationship at any time, for (almost) any reason. There is, however, a small percentage of employees who work under contract, which gives them a different set of rights and responsibilities. If you are a contract employee and believe that you have been wrongfully terminated or discriminated against, you may have a case against your employer, even if most workers in your position would not.

Negatives to having an employment contract surround an employee’s relative lack of freedom. You may simply be prohibited from leaving your current position before the end of the contract term. Alternatively, clauses like non-compete or non-solicitation provisions can hamper an employee’s ability to leave their job (though these clauses must conform to a very narrow set of criteria in order to be enforceable), or there may be non-disclosure agreements if your job involved dealing with trade secrets.

Dealing With Breach of Contract

If you are a contract employee, one other small positive about being under contract is that it is often easier to tell if there has been a material breach of your agreement. An at-will employee often has to guess whether they have been mistreated, but most of the time, all a contract employee needs to do is read their agreement. Any action that prohibits a contracted party from fulfilling their end of the bargain can count as a breach, which means that the other party is on the proverbial hook for damages.

One thing to keep in mind if you suspect your contract has been breached is that very often, employment contracts include provisions that may regulate your options in terms of actually seeking damages. For example, some employment contracts for high-level white-collar workers may mandate that arbitration be the method of dispute resolution, meaning that it would then be impossible to file suit in court. It is crucial to be familiar with what your employment contract actually has to say.

Since employment contracts are less common than at-will employment, it can be confusing if you have never before had the chance to work under one. A New York City employment contract attorney from Mansell Law, LLC can help to answer any questions or concerns you may have about your employment, and about the agreement. Contact our office today at 646-921-8900 for a free consultation.

By Mansell Law, LLC | Posted on June 23, 2022
« Was My Termination Wrongful?
Undocumented Workers Have Employment Rights »
Skip footer and go back to main navigation