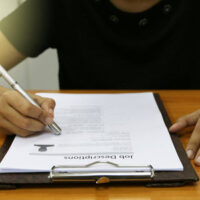 The common-law concept of restraint of trade is an idea that dates back to 18th-century English law, but is still observed in today’s United States. The principle of free trade is a sacred one in U.S. and U.K. law, and restraining it has to be done under very specific circumstances. Restricting trade sometimes happens by means of non-compete agreements, where an employee is prohibited from working in a specific field (whether opening their own business or working for someone else) for a certain period of time. However, these agreements must be narrowly tailored, and it may be actionable if yours is not.

Non-compete agreements originally came into vogue to help protect trade secrets from being given to rival firms when an executive left their job. They were designed as tools to safeguard a former employer’s interests while still allowing an employee to leave their job – though it might arrest their progress in finding a new one. Most non-compete agreements come as part of a greater severance agreement, and stipulate that a person cannot work in a given field for a certain period of time – usually between 6 months and 2 years, depending on the specific industry.

To the average person, a non-compete agreement can seem unfair – after all, no one should be restricted from earning a living. New York, as a general rule, agrees; both the State and the City tend to dislike non-compete agreements and will only uphold those that avoid three major issues: (1) they cannot be too geographically broad; they cannot last an unreasonable length of time; and (3) they cannot be inappropriately vague. If you suspect that yours may fall into the trap of being too broad or vague, you may be able to file a claim against your former employer.

Non-compete agreements are sometimes found to be appropriate, most often when an employer can enumerate a specific interest that they believe needs protecting. There are several major interests that an employer will try to argue merit enforcing a non-compete agreement, but the most often seen are the protection of trade secrets and the protection of customer relationships – the type of trust built over many years between a client and a business. These are seen as important enough to balance with the departing employee’s right to pick and choose where they work next.

Be advised that if you are terminated without cause, some New York courts have held that your employer may not enforce any non-compete provisions against you, but this is not a universal ruling. The New York Court of Appeals has explicitly stated that a court has to determine whether enforcing the non-compete agreement in a given case is “reasonable” if the employee was fired without cause. In some cases, the court will hold that it is still reasonable to enforce the non-compete because it is not unduly restrictive.

Sometimes a non-compete agreement may be reasonable, especially in certain industries. However, too often an employee will be taken advantage of, or unduly restricted from making a living in their hometown. If you suspect that you are in this situation, contacting a New York City employment contract lawyer from Mansell Law, LLC can be the first step toward making things right. Contact our offices today either via our web form or via telephone at 646-921-8900 to set up a free consultation.

By Mansell Law, LLC | Posted on August 6, 2020
« How will the Supreme Court’s opinion in Genesis impact FLSA collective actions?
Have I been misclassified by my employer, and how does it affect me? »