What Is A Non-Compete Agreement? 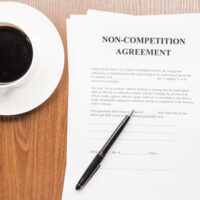 When a person chooses to leave their job, they will simply be allowed to depart in the strong majority of cases. However, employees in certain industries, or those with certain extraordinary skills, may be asked to sign what is known as a non-compete agreement. These agreements are sometimes appropriate, but very often, they can unfairly restrict the departing employee from finding other, comparable employment. Understanding these agreements can save a lot of time and trouble.

Employers Can Overstep Their Bounds

New York law defines a non-compete agreement as an agreement that prevents a former employee from working for a competitor, or opening a competing business, in a certain field for a specified period of time. There are plenty of situations when non-competes are not only accepted, but are considered standard practice (for example, a morning-show radio DJ might be asked to sign a non-compete agreement, so that their listeners will not flock to a competitor’s radio station in droves).

That said, a non-compete agreement is a situational tool; they cannot be used willy-nilly, with every employee that leaves a company. In New York, a non-compete agreement is only enforceable if (1) its provisions do not harm the public; (2) it protects an employer’s legitimate business interests; and (3) its limitations on timespan and geographical area are reasonable, without imposing undue hardship on that former employee. All these criteria must be established before a court will side against the individual.

In general, New York courts do not like to enforce non-compete agreements, simply because they want to perpetuate the idea of the free market (which requires that employees learn and grow, which may include changing jobs). However, if you are under a non-compete agreement and you violate it, the court may also decide that your violation harmed your former employer’s interests, which is against public policy (never mind that violating a non-compete agreement can also constitute tortious interference with contracts or business relations, which is a crime in New York).

If you have been asked to sign a non-compete agreement, know that as of this writing, there is no New York law that requires you to do so. However, it is fairly common for employers to make signing a non-compete agreement a condition of employment; sometimes this is accomplished by including one in new employee paperwork, so that the new hire does not notice what they are signing. Contacting an experienced attorney may help you determine exactly what to do in your specific situation.

Depending on your specific industry and your skill set, a non-compete agreement may be appropriate. However, if it is not, or if you have questions about one that your employer wants you to sign, calling a New York City employment discrimination attorney from Mansell Law, LLC may help you decide on the best path to pursue. Call our offices today at 646-921-8900 for a free consultation.