Close Menu
NYC Employment Lawyer > Blog > Employment Discrimination > Do I Have “Religious Freedom” In The Workplace?

Do I Have “Religious Freedom” In The Workplace? 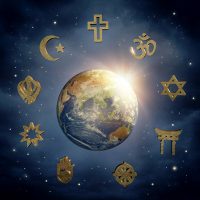 The First Amendment to the United States Constitution guarantees freedom of religion in that “Congress” (and government in general) cannot favor one religion over another. However, what many people miss in this day and age is that the First Amendment does not apply to private enterprise, or in some cases, only applies in specific ways. While this does not mean that private employers can discriminate on the basis of religion, it does mean that they have the right to regulate speech (and some actions) in the workplace itself. If you have questions or concerns over potential religious discrimination at work, contacting an experienced attorney can help to clarify them.

Is Religion A Protected Class?

New York’s antidiscrimination laws are fairly extensive, and in some places even go beyond the federal antidiscrimination statutes in terms of protecting more classes of people. Religion is a protected class under both the federal Civil Rights Act of 1964 and the New York State Human Rights Law (NYSHRL), meaning that employers may not discriminate at any point from interviewing to hiring to firing. However, this also means that other employees cannot discriminate, either as individuals or on behalf of the company.

What this means is that if a coworker decides to mistreat you based on your religion (or perceived religion), your employer may be on the proverbial hook if you decide to file a claim, regardless of whether the coworker is your superior and has power over you, or they are your equal or underling and simply create a hostile work environment. In addition, if they choose to deny a reasonable accommodation based on your religion, it may also be grounds for a complaint.

Both state and federal law prohibit employers from discriminating on the basis of religion, but they also require the employer to reasonably accommodate an employee’s “sincerely held religious beliefs,” unless doing so would be an undue hardship to the business. The law is worded very specifically in New York – some hardship is permissible, but undue hardship is not. The hardship must be a “significant difficulty or expense” before the employer can reject a request for accommodation out of hand.

That said, it is important to keep in mind that employers do have the right to take action based on an employee’s behavior outside the workplace if it reflects negatively on the business as a whole. For example, an incident in January 2022 cost two people their jobs after it was found that they had perpetrated a race-based attack on a family, verbally harassing them and pouring beer on them after making derogatory comments about the family’s skin color. They were both terminated by their employer, even though they were not acting within the scope of their employment and were off the clock. If your religious practices create a hostile work environment for others, or actively place other workers in danger, you may face similar consequences.

While the private sector has somewhat different rules to the public sector in terms of freedom of speech and expression, employers generally must respect religious practices unless it would cause them serious hardship – but freedoms are never absolute. If you have questions or concerns about possible discrimination based on religion, contacting a New York City employment discrimination attorney from Mansell Law, LLC may help to get them answered. Contact us today at 646-921-8900 for a free consultation.

By Mansell Law, LLC | Posted on April 7, 2022
« What Is New York’s Position On Unvaccinated People In The Workplace?
Class-Action Suit Claims Employees Were Not Paid On Time »