What Does New York Law Consider Sexual Harassment In The Workplace? 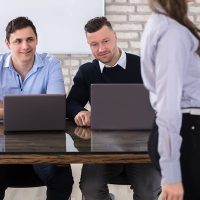 Sexual harassment is a pervasive problem in U.S. workplaces, particularly for women, though employees of all genders may experience this phenomenon. The Equal Employment Opportunity Commission (EEOC) received approximately 6,500 new claims alleging sexual harassment in 2020, which does not sound like much, but it makes up around 10 percent of all claims received. New York City and State law, by comparison, is even more harsh on those who engage in such behavior.

Sexual harassment has a variety of different definitions, though in general, it is defined in the workplace as unwanted verbal or physical sexual advances or other sexual or discriminatory action that the recipient deems offensive. Unlike the pop culture presentation of this kind of behavior, it does not have to happen between people of the opposite sex – the alleged perpetrator and the victim can be of any gender and the behavior will still be actionable.

Federal law sees sexual harassment as a type of sex-based discrimination – after all, one can plausibly argue that a person engaging in sexual harassment would not do the same thing if their victim was of a gender to which they were not attracted. However, there are still specific characteristics that such a claim has to show before it can be actionable – for example, the law states that the harassment must be so “frequent or severe” that a hostile work environment is created.

Unlike federal regulations, New York’s Human Rights Law is extensive and explicitly declares workplace sexual harassment to be unlawful. In 2019 and 2020, changes were made to the law to broaden the number of people who can take advantage of its provisions – for example, in New York, sexual harassment does not need to be “severe or pervasive” in order to be actionable, unlike under federal law or the law of many other states. Another important change is that the law now applies to all employers in the state, regardless of how many employees the company has.

If someone wants to file a claim with the EEOC, they should be aware that the process to do so is quite long and ultimately, the EEOC may decline to take the case. However, in New York, the harassed victim can file a complaint with the New York State Division of Human Rights, as long as they do so within 1 year of the alleged harassing behavior. While the outcome is not guaranteed, the process is generally faster and leaves you in a state of limbo for much less time.

If you suspect you have been the victim of sexual harassment, but are unsure, or if you have other questions, calling an experienced New York City employment discrimination attorney from Mansell Law, LLC can be the best way to get your options clarified. We are ready and willing to try and assist you. Call our offices today at 646-921-8900 for a free consultation.