Is Being Pregnant A Protected Characteristic? 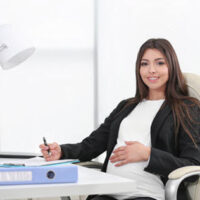 When a person becomes pregnant, it is usually considered a happy occasion in the family. However, some employers will see a pregnancy as an opportunity to cut that employee’s hours, deny them advancement, or to generally not treat the employee the same as any other, non-pregnant person. The average person might think temporary conditions like pregnancy are not covered under antidiscrimination laws, simply because pregnancy comes to an end, but New York City, state, and U.S. federal law all protect pregnant people from unfair treatment. You have the right to seek redress if it happens to you.

The state law, like the city law, forbids any covered employer (which is nearly every employer, with rare exceptions) from refusing to hire, firing, or changing the ‘terms and conditions of employment’ of any employee because they are pregnant. Pregnant employees also have the right to return after a leave taken due to pregnancy or any related condition, such as preeclampsia or gestational diabetes. If any of these potential negative employment actions happen to you while you are pregnant, it is your right to either file suit, or file a complaint with the city or state Human Rights Commission.

In addition, it is worth noting that the New York state and city pregnancy discrimination laws refer, at least as of this writing, to women only, and pregnancy discrimination law is referred to as based in gender discrimination. Depending how the law is interpreted in any specific challenge, this may leave transgender pregnant people out in the proverbial cold, but given the current lack of jurisprudence on the issue, this may be a question that will have to be decided when a specific case arises.

A pregnant employee should be able to enjoy the impending birth of a new member of their family without having to worry about their job security or advancement prospects. If you believe you have been discriminated against on the basis of pregnancy, calling an NYC employment discrimination attorney from Mansell Law, LLC can help answer any questions you might have about how to proceed with a potential claim. Call our offices today at 646-921-8900 for a free consultation.

By Mansell Law, LLC | Posted on June 11, 2021
« Am I Entitled To Meal And Rest Breaks Under New York Law?
What Constitutes “Reasonable” Accommodations At Work? »