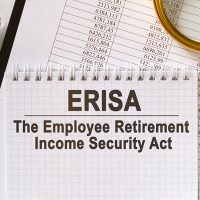 The Employee Retirement Income Security Act (ERISA) was passed in 1973, at the federal level. It was designed to establish minimum standards for private retirement and health plans (more specifically, voluntary plans, provided by employers even though no law makes them do so), ensuring that retired workers receive what they put in. However, sometimes, people encounter problems accessing their plan through no fault of their own. When this happens, a knowledgeable attorney can help smooth out the process.

What Does ERISA Cover?

Despite the name of the law indicating that it only deals with retirement, ERISA covers a significant amount of employee benefits, as long as they are part of a voluntary plan and not legally mandated. This can include anything from pension benefits (long and short term) to medical and dental coverage. The only major exceptions have to do with who a person works for – for example, the most commonly seen situation is if someone works for a city or state government. If they do, their benefits are covered by state law rather than by ERISA itself.

One of the most important functions of ERISA is to protect plan recipients’ disability benefits. If someone had to retire due to an injury or occupational disease, disability payments may be their only income. New York State in particular recognizes a wide variety of disabilities, but too often, insurance companies may seek to deny long-term claims simply to save money. If this happens, you may have to file an administrative appeal first, but if this does not pan out, it may be possible to file suit in federal court to get the benefits you deserve.

Generally, filing an ERISA claim is at least superficially similar to filing a claim for disability benefits with the Social Security Administration (SSA). You must file the relevant paperwork, along with your employer and your general practitioner, plus the relevant medical records. In some cases, you may be required to submit to the equivalent of an independent medical exam as well. Unlike with the SSA, however, ERISA claims must be decided within 105 days – though unfortunately, the low approval rate is another thing these claims agencies both have in common.

If your claim is denied – which it may be, despite its validity – you are entitled to an administrative appeal. If you are unsuccessful at the administrative level, though, you are permitted to file an ERISA lawsuit in federal court. Be advised that this is not a traditional lawsuit; rather, it is structured more like a civil appeal in that there is no new evidence allowed. The court will simply review what you have already submitted, and render its decision.

Between ERISA and New York state law that may augment or conflict, filing and winning your claim may be confusing and difficult. Having a knowledgeable New York City ERISA attorney from Mansell Law, LLC on your side may be the difference between success and failure. Contact our New York offices today at 646-921-8900 for a free consultation today.

By Mansell Law, LLC | Posted on April 22, 2022
« Class-Action Suit Claims Employees Were Not Paid On Time
Are Meals And Short Breaks Required Under New York Law? »