My Employer Has Misclassified Me As An Independent Contractor! 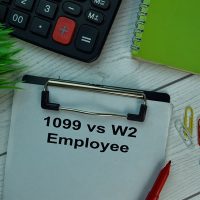 When a business hires employees, they must report that number of employees in order to remain in compliance with programs like unemployment insurance, Social Security, tax withholding, and the like. However, many employers are not above using unethical methods to lower their financial burden. One of the most common maneuvers that an employer may try in these situations is misclassifying an employee as an independent contractor, because independent contractors are entitled to fewer benefits than full-time employees.

In an economy still trying to recover from a global pandemic, many employers are looking to hire more independent contractors, because they cost less overall – for example, independent contractors do not incur costs for Social Security, or workers’ compensation insurance. However, potential hires must not be misled as to the nature of the job they are accepting; if they believe they are being hired as an employee, that creates an expectation that they will receive all the benefits of being a full-time employee. To do otherwise is misclassification.

That said, one major problem for an employee who suspects they have been misclassified is that it can sometimes be difficult to determine whether they are an employee or an independent contractor, if their job title has never been clearly specified. Determining someone’s status is not something that can be done with one question; rather, it has to be done on a case-by-case basis, assessing a number of different factors. The ultimate decision is made based on how much control one has over their own work.

Both federal and New York state law are clear; employers who engage in misclassification are committing fraud against their workers, and against the public. Engaging in these practices gives a business an unfair advantage – spending less money on benefits for workers means more stays in the budget, at least in theory. New York has a permanent Joint Task Force, established in 2016, with the specific aim of investigating misclassification and worker exploitation issues, recovering almost $150 million in lost wages for New York workers.

Be advised that if you are an independent contractor in New York City, you do have certain codified rights, even without being an employee. The city enacted the Freelance Isn’t Free Act, coming into force in 2017, which guarantees a written contract, “timely and full payment,” and protection from retaliation, among other rights. Even if you are not misclassified, you still have the ability to seek redress against an employer who mistreats you, at least in New York.

If you believe that you have been misclassified by your employer, contacting an experienced New York City employment discrimination attorney is a good first step toward seeking redress. An attorney from Mansell Law, LLC can help you file a complaint with the right authorities, and to answer any questions you may have about the process. We are happy to try and assist you. Call our offices today at 646-921-8900 for a free consultation.

By Mansell Law, LLC | Posted on February 3, 2022
« Is Unpaid Overtime Legal In New York?
Should I Sign A New York Employment Agreement? »