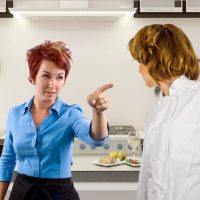 The term ‘hostile work environment’ has become somewhat overused, with the average person applying it to every situation where interactions between coworkers are less than cordial. In New York, it has a more specific legal meaning – if you have been experiencing harassment or behavior that makes it difficult to do your job, contacting an attorney who is well versed in this area of law may help you decide how best to proceed.

How Is It Defined?

It is important to keep in mind that teasing or jokes (or even harassment) do not always equate to a hostile work environment. That environment is only created when the harassment is discriminatory (specifically, it discriminates based on a protected characteristic under the law), and when at least one of the two following situations has happened:

If a supervisor or co-worker teases you or harasses you about how you prefer the Yankees to the Mets, it may be unwelcome or even inappropriate, but one’s preference in sports teams is not a protected characteristic under the law. Thus, while you may be able to complain to Human Resources about such behavior, you cannot claim your workplace is a hostile work environment. If, however, you were being harassed due to your religious faith, the behavior might rise to the level of illegal harassment, because religion is a protected characteristic.

In order to mount a successful claim of a hostile work environment, one has to establish that they are being harassed for a protected characteristic, and that a reasonable person would deem your office intimidating or abusive (or that you must endure the illegal harassment or be terminated). This is not an easy task, not least of all because you may face retaliatory action from your employer, especially if your harasser is a supervisor. However, New York has consistently widened the protections of its Human Rights Law, making it easier for these claims to “stick” in court.

For example, in 2019, New York removed the requirement for the harassment to qualify as “severe or pervasive” before it could be actionable – in other words, someone who has been the subject of illegal harassment previously had to show that the pattern of behavior met a specific standard. Now, that is not the case – though an employer may be able to assert the defense that any untoward behavior was merely petty jokes or insults. With the right legal help, a hostile work environment claim may have more chance of carrying the day than it would have before.

Reporting workplace harassment or a hostile work environment is an intimidating prospect for many, simply because they do not know how hostile the behavior has to be in order for them to have a cause of action. If you believe that you are the victim of targeted discriminatory harassment in your workplace, calling a New York City employment discrimination attorney from Mansell Law, LLC can be the first step toward setting things right. Call our offices today at 646-921-8900 for a free consultation.

By Mansell Law, LLC | Posted on March 2, 2022
« Spotting Sex Based Discrimination In New York
Modifications Made To New York’s Laws Against Wage Theft »
Skip footer and go back to main navigation